Champions League: Despite defeat: Königsblau hibernates in the premier league 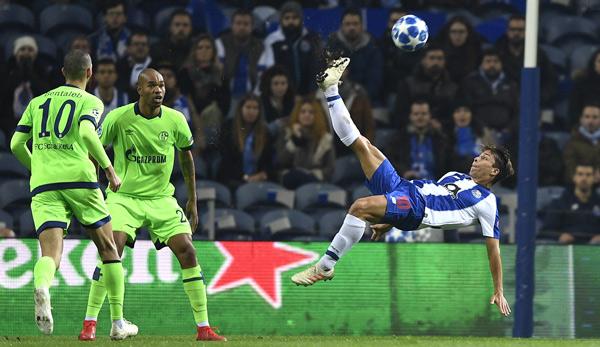 Schalke 04 suffered his first defeat in the premier league shortly after reaching the last 16 of the Champions League at FC Porto. Coach Domenico Tedesco’s team lost 3-1 (0-0) to the Portuguese champions, and lost their chances to win the group.

When the players of Schalke 04 entered the Dragon Stadium, they had already completed their mission. Thanks to Moscow’s help, the runners-up had already reached the Champions League eighth-finals before their final defeat. But then the royal blues lost their 200th European Cup match with the defeat at the Portuguese championship and lost their chance to take first place in Group D.

However, the Gelsenkirchen team are sure to finish second because the Russian champion Lokomotive Moscow had previously defeated the Turkish title winner Galatasaray Istanbul 2-0 (1-0) with three ex-Schalkers. Before the group final on 11 December against Lok with former world champion Benedikt Höwedes, outsider Jefferson Farfan and sports director Erik Stoffelshaus Schalke is five points behind front runner Porto four points ahead of Istanbul.

Eder Militao (52.) and Jesus Corona (55.) sealed the first Schalker defeat in the group stage in front of 41,603 spectators in the Estadio do Dragao with a double strike after the half-time break. Moussa also met Marega (90.+4). The defence of the visitors, who came late to the honorary goal with a penalty kick from Nabil Bentaleb (89th), was completely overtaxed in the phase at the beginning of the second section.

The sixth entry into the knockout round of the royal class is “a milestone” for the Gelsenkirchen team, as coach Domenico Tedesco emphasized. Sports director Christian Heidel had set “wintering in the Champions League” as his goal. In the Bundesliga, after a catastrophic false start as Table 14, the royal blues showed their strongest performances in the European Cup, still far behind their own expectations.

Schalke also started courageously in Porto, but without any clear goal chances. Goalkeeper Ralf Fährmann, on the other hand, fired shots from Danilo (15th) and Moussa Marega (19th). With increasing playing time, the 28-time Portuguese champion became stronger and stronger. Fährmann saved again against Herrera (47.), but was then powerless. In the Königsblauen, the offensive swing of the 5:2 victory in the Bundesliga against 1. FC Nuremberg was no longer visible.

When the Schalkers welcomed their 4500 fans during the warm-up, 3700 kilometres away in Moscow Grzegorz Krychowiak (43.) and Wladislaw Ignatijew (54.) had already provided clear conditions with their goals. Höwedes, long-time captain of the royal blues and transferred to Moscow last summer, only sat on the bench. Farfan played against them until the 90th minute. Lok reduced the gap to third place Istanbul to three points and thus maintained his chance of entering the Europa League.

In the penultimate group game, Tedesco once again rotated on a grand scale, although “the automatisms go a little way towards fluting”, as he himself admitted. The coach exchanged five players for the Nuremberg game. Among the players on the bench were Sebastian Rudy and striker Guido Burgstaller. After a break of four compulsory games, defensive boss Naldo was allowed to play again.

Domenico Tedesco (coach Schalke 04): “We wanted to win. It was also seen in the line-up, we were rather offensive. We are disappointed with the result. Porto was better, they did almost everything right. We’ve had too many ball losses.”