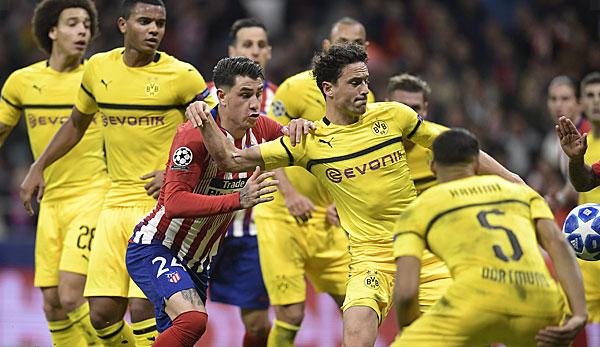 Borussia Dortmund have suffered their first defeat in the Champions League at Atletico Madrid under coach Lucien Favre. The nimbus of invincibility is now gone, but that could possibly help more than harm the BVB team.

Without having taken anything with them, the BVB did not have to leave the Wanda Metropolitano stadium after all. “This is for my brother,” said Dortmund goalkeeper Roman Bürki, holding the jersey of goal scorer Antoine Griezmann in his hand.

But in the table of the Champions League Group A this does not help Borussia. Two wins from the two games against Bruges and Monaco will now be needed to reach the round of sixteen in first place. Otherwise one would have to hope for a slip Atleticos.

This starting position is feasible and still comfortable enough.

Bürki not only talked about this side note in the catacombs, but also said that Dortmund’s first loss of the season might not be so bad either. This sharpens the senses after the euphoric previous weeks, said the Swiss, who had already noticed a certain tiredness in his head the day before.

That matched Captain Marco Reus’s statement after the game. “We weren’t mentally up to speed,” said the national player, who astonished some observers by saying that the BVB had even controlled the first 25 minutes of the match.

Really Reus wasn’t wrong, maybe only the word ‘control’ wasn’t the right word at this point. Dortmund hadn’t really played out a goal chance in the initial phase of the game, but they had indeed fended off the home side’s ongoing offensive efforts with many legs. The BVB did not play grandiosely like many times before, but they did not fall behind in this phase and acted on the ball and in the game structure clarified enough to make the game reasonably balanced.

That was it, however, with the positive news, because afterwards one not only cashed in the end deserved 0:1, but lost the access to the game after that and got powerfully into the swim. Only a strong Bürki prevented worse, but in the second section he could not prevent the deserved defeat.

With that the nimbus of invincibility for the BVB is gone and it is astonishing enough after the events of the previous season that this only happened in November after 15 compulsory games without bankruptcy. This was how all the players who commented on the match after the 0:2. The motto: No breaking a leg, Atletico was just better, that won’t knock us over.

While many spoke of Lucien Favre’s passing the mature test after a surprising and convincing 4-0 first leg win over Rojiblancos, the game in Spain’s capital could have a similar effect despite the bankruptcy.

It was already clear before the kick-off that against the Spaniards, who were thinking of revenge, another big test would be waiting for the young BVB team, which had been newly formed before the season. Although the team did not pass this test, it could possibly help the team more than harm it in its development process – in keeping with Bürki’s statement.

Atletico has shown the BVB the limits in some phases of the game. The Spaniards have crossed Dortmund’s plan to get into the last third with the fast outsiders Christian Pulisic and Jadon Sancho by clever moving and doubling and paralyzed this weapon for over 90 minutes. Rumpelstilzchen coach Diego Simeone’s team also attacked the experienced Dortmund clockmakers Axel Witsel and Thomas Delaney so early that the real stability factor for Borussia was largely none at all.

Dortmund also bit their teeth out on the Madrid defence, which, unlike the first leg, was now as notorious as in previous years, and found no means to run or pass into the depths. “They stood defensively very well, very compactly and were dangerous after ball conquests. You’ll have to act fast. You have to be patient against such teams and avoid unnecessary ball losses,” said Favre.

This had not happened to the BVB so consistently this season, so that you can be sure that the tinkerer Favre, like his players, will draw some learning effects from such a game. It could help the squad to mature further as Atletico have shown what a great team can be, at least in this game.

The extent to which visual instruction will be beneficial to one’s own strength in the future is of course a different matter at the moment. Because the fact that you have to accept your first defeat just before the important duel with FC Bayern in the Bundesliga is a certain explosive force.

All of Dortmund’s fans claimed late on Tuesday evening that the duel with Atletico would have no effect on the game on Saturday. In the last few weeks too much has been done in the right way and strong football has been offered – and that was even much better than what the record champion recently got on his toes.

However, there are many mature tests during one season and the next one for Borussia Dortmund is now directly in the house.

This could be bigger than the one in the home game against Atletico. But then you won 4-0.