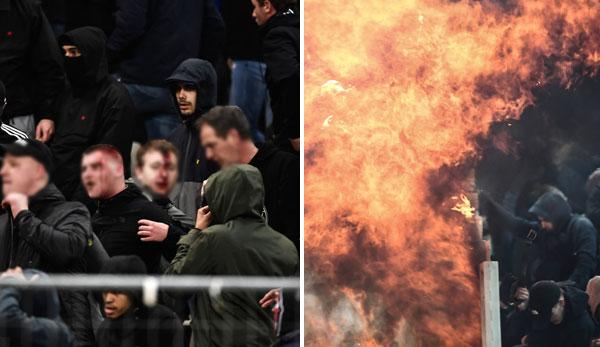 In the run-up to the meeting between AEK Athens and Ajax Amsterdam in the Champions League (live on DAZN), supporters of both teams and the police fought hard.

Pictures and videos show how a follower of the Greek first division team throws a pyro torch into the guest block. Pyrotechnic objects also flew from the fan area of the Dutch.

For reasons as yet unknown, policemen stormed the Ajax block and attacked the fans of the Dutch record champion with batons. Some Ajax fans have been injured. An exact number is still unknown.

Ajax actor Matthijs de Ligt then interrupted his warm-up program and tried to calm the troublemakers.

Already on Monday evening, the fans of both camps had fought fierce arguments in which, according to Dutch media reports, hooligans of AEK rival Panathinaikos Athens as well as supporters of the Polish first league team Cracovia were said to have participated.

Ajax supporters had already attracted negative attention two weeks ago during the match against Benfica Lisbon. The club received a fee of 71,000 euros from UEFA. In the event of another infringement, Ajax is threatened with an away game on the European stage without its own fans.

Soccer: Mbappe and Neymar in starting eleven against Liverpool
Champions League: Szalai flies – Hoffenheim is out