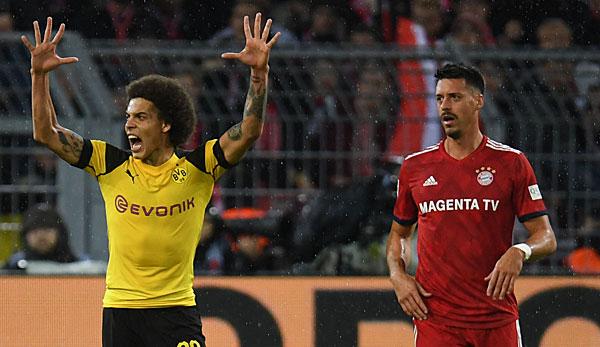 Axel Witsel has confirmed that FC Bayern Munich wanted to sign him in 2017. At that time he played in China with TJ Quanjian. Instead of joining FC Bayern, Witsel joined Bundesliga rivals Borussia Dortmund a year later.

“Mr Ancelotti asked Fabio Cannavaro, my former coach at Tianjin Quanjian, about a transfer and deposited his interest. But Fabio made it clear to him relatively quickly that he wouldn’t let me go,” Witsel told SportBild.

Witsel, on the other hand, immediately felt that the club was “the right choice” when Dortmund was interested: “The BVB was a challenge for me that I absolutely wanted to accept. After his time in China, Witsel had a “longing for football at the highest level”.

Dortmund paid a transfer fee of 20 million euros for the Belgian national player.

On Saturday (15.30 in the LIVETICKER) Witsel will meet with the BVB and the rival FC Schalke 04, where Witsel will have been in conversation in 2011. “Yeah, I heard about that, too. But I can tell you: There was no contact,” said Witsel.