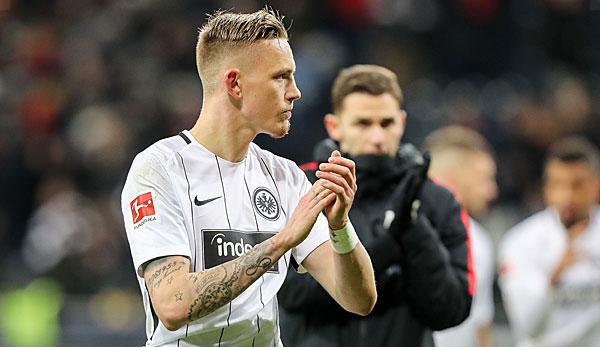 Borussia Dortmund has engaged Marius Wolf von Eintracht Frankfurt. Although the offensive wings at BVB are not construction site positions, Wolf is a player who embodies exactly what BVB lacked last season. With his style of play and attitude, he also fits perfectly with the style of the new coach Lucien Favre. Thanks to its opt-out clause, Wolf becomes a bargain for the BVB and thus a transfer without any risk.

“Mentality beats talent.” As simple as Roman Weidenfellers’ answer might sound in an interview with Funke Mediengruppe before his last home game, she unsparingly revealed one of the core problems of the BVB in the past season: “I appeal to every single player: Talent alone is not enough. You have to work hard for things every day.”

Weidenfeller’s appeal remained unheard, the subsequent match against relegation candidate Mainz 05 on matchday 33 became one of “ashamed”, as sports director Michael Zorc subsequently said. While Weidenfeller was celebrated exuberantly from the south stand, the fans accompanied the rest of the team into the cabin with a shrieking whistling concert.

The game against Mainz revealed what the then captain Marcel Schmelzer had already predicted in March: “If you can’t get close to one hundred percent in mentality, commitment, willingness to win, then it will also be difficult in the Bundesliga”. With the forced search for a new identity and precisely those hundred percent, the BVB managers have recognized the signs of the times – and with Marius Wolf they have engaged a player to whom the painfully missed and demanded virtues have been transferred into the genome, not least because of his changeable career path.

“Marius always gives it all, in practice and in the game. Nor is he too good to play in positions that may not nominally be his favourite,” said coach Niko Kovac about Wolf, who became a key figure in the Kovac system at Eintracht Frankfurt not only through his five goals and eight templates, but also through his attitude and amount of work.

With an average of 11.59 kilometres per game, Wolf was one of the strongest Bundesliga players last season. With his nearly 325 season-kilometers he is by far the strongest player of the team. “Marius has often stood out with the way he plays football, with his runs. He’s always on the move, up and down, you can’t kill him,” enthused Frankfurt’s sports director Fredi Bobic at the beginning of January.

Wolf became such a meticulous worker during his career because of his time at Hannover 96, where he was put in reserve for the pros after only two games. For Wolf it was certain that something like this would never happen to him again: “I thought you’d get your chance back sometime. If not here, then somewhere else,” he told the Frankfurter Rundschau at the beginning of the year.

Eintracht gave Wolf this chance and the loan deal between Hannover and the SBU was a stroke of luck – both for the player and the club. The same is now hoped for by the BVB from the Wolf commitment, because this not only corresponds in character to the much-cited new BVB identity, but also fits with his playing style and his skills to the philosophy that Lucien Favre inoculated to his teams in Gladbach and Nice.

Favre stands for a mixture of controlled and possession-oriented offensive and a low and compact defence with explosive switching torques. Wolf – who defines himself in his game by dynamics, pace and move to the goal and also has strengths in the duel (75 percent successful tackles) – should not find it difficult to integrate in a 4-4-2 system under Favre. However, Favre also attaches great importance to passing safety in his own game.

However, with a pass rate of almost 71 percent, Wolf still has conspicuous weaknesses there. However, Favre is regarded as a promoter of ambitious and disciplined up-and-coming talents and pays meticulous attention to small details. “He explains to you, for example, how to turn when blocking a cross, or how to stand at the pass and play it into the right foot,” said Alexander Ring, who played with Borussia Mönchengladbach under Favre, once in an interview with SPOX: “If you go along, Favre makes you better every day”.

However, unlike in Frankfurt, Wolf has to face a tougher competitive situation at BVB. The offensive wings in Dortmund are actually no construction site positions and prominently staffed. In the past, either Christian Pulisic or Andriy Yarmolenko were seated on Wolf’s ancestral right side. In view of the “Everything at the beginning” orientation that the BVB has been pushing since the end of the season, however, Wolf should have good reason to hope for a lot of playing time, despite the broad line-up.

Even if Wolf were to cheat at the beginning with his role at the BVB or with the system under Favre due to the fit-oriented playing style, this would be bearable for all sides. Unlike, for example, the change of Maximilian Philipp, the transfer of Wolf is not burdened by a high transfer fee, which makes immediate services almost indispensable. Last year, the BVB paid 20 million euros for Philipp and probably drew the exit clause of only five million euros for Wolf.

The five-year contract, which Wolf signed, is a clear signal that BVB is planning with him in the long term. Perhaps the BVB even brought him in as an alternative or changing the guard for Lukasz Piszczek, a right-back who was repeatedly injured. The 32-year-old Pole missed a total of 17 matches last season with an outfield rupture. Wolf has already assisted in unity in legal defence and thus recommended himself for higher tasks. His polyvalence could also benefit him at BVB.