Bundesliga: Why Kimmich moved into the midfield of the FCB – and how things will continue 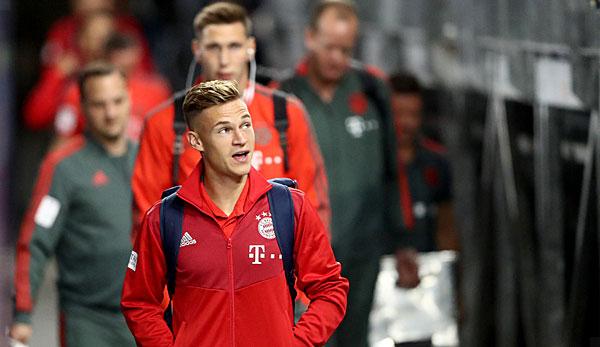 Joshua Kimmich pushes on and off the pitch into the centre of power while his club and his national team are undergoing trials and upheavals. The new role of a young player who no longer considers himself young.

After all, there is one task that Kimmich has not yet been entrusted with at FC Bayern, even though he has the right ideas: squad planning. “I can’t buy him,” Kimmich said apologetically the other day after the German national team’s international match against Russia, “but Kai Havertz is a player who would fit in well with us.”

It wasn’t just 19-year-old Havertz who convinced Kimmich in this 3-0 win, he also said that “the young players did very well”. Young players, for Kimmich these are Serge Gnabry, Leroy Sane or Thilo Kehrer, for example, who – just by the way – are as young as Kimmich. Kimmich himself would probably not call Kimmich a young player.

Because he’s already further along, he’s even on his way to the center of power. In the German national team as well as in FC Bayern. Both on and off the court.

Off the field, this is expressed by the fact that Kimmich has developed into one of those who actually always speaks after games. No matter if his team won or lost, no matter if it rains outside or the sun shines, no matter if he played well or badly. Kimmich stops at the journalists and says what he has to say with a focused look – and always seems so thoughtful that you hardly notice whether his team has actually won or lost, whether it’s raining outside or the sun is shining, whether he played well or badly.

When Kimmich stands there and talks, he is now allowed to talk about his role in the center of the square. After national coach Joachim Löw, Bayern coach Niko Kovac has also transferred him from the right back to the centre of the midfield – where Kimmich already played in his youth.

It was one of Kovac’s most important measures in the so-called fate game against Benfica Lisbon. If Kovac had lost the game, he probably would have lost his job. To prevent that, he ordered Kimmich into central midfield. In a way, Kovac put his fate in Kimmich’s feet – and was not disappointed.

Kimmich took on this role confidently, as he had since the start of the season in the national team. He positioned himself well, he played good passes, he prepared two goals for Robert Lewandowski – and perhaps most importantly, he made other players better at the same time.

With Kimmich’s transfer to the central midfield, Kovac changed his system to a 4-2-3-1. Leon Goretzka feels particularly comfortable at Kimmich’s side on the newly created double six, Thomas Müller enjoys the tenth position behind Lewandowski, left-back David Alaba has more courage to attack because of the double central protection.

“We had a good balance on the double six. It has given us stability and more opportunities ahead,” Kovac said. It was a small plea for Kimmich in the central midfield – and thus the completion of Kovac’s rethinking.

After Kimmich was sent to the central midfield from the back right by national coach Joachim Löw, Kovac ruled out a similar situation at FC Bayern for the time being. “For him there is currently no other than the right-back position,” Kovac said in mid-September in an interview with SPOX and Goal. Probably partly out of conviction, but also a little out of need. Not least the personnel policy of FC Bayern and the injury bad luck obstructed Kimmich at that time a change into the center. Sebastian Rudy, who could have filled the right-back position, was sold to FC Schalke 04 this summer and Rafinha was injured. There were simply no alternatives to Kimmich.

But when Rafinha was fit again, Kovac turned him into the team against SC Freiburg at the beginning of November. In the central midfield, Thiago also dropped out, apart from Corentin Tolisso, who was injured for a long time. So there was a need, and since Kimmich always plays this season (no missed minute in Bundesliga and Champions League), he just got his chance there. Kimmich was disappointed and called the game (with his usual focused look) his worst in FC Bayern’s jersey. He used his second chance against Benfica and confirmed his performance in the following Bundesliga match against Werder Bremen (2:1).

Kimmich prepared the young player Gnabry for the 1:0 with a great pass and he was the most influential player on the pitch: he ran the most (12.86 kilometers), he was the most often on the ball (109 times), he had the best pass rate (93.8 percent) and the most ball conquests (nine) and also his duel rate (66.7 percent) was excellent. “Joshua has led very well and ordered,” praised sports director Hasan Salihamidzic. Kovac even called the performance “extraordinarily good”.

These are the latest verses of a week-long hymn of praise to midfielder Kimmich, who is already being hailed as the future captain of the club and association.

After his transfer to the headquarters of the national team, Sami Khedira declared that Kimmich could “hold the position of sixth in the long run”. Toni Kroos had been “extremely pleased” about the transfer, Kimmich was even “predestined for this position” because of “two-fight leadership and understanding of the game”. Mats Hummels said: “He really has everything for this position. But you can put it anywhere – it always comes out something.”

And that’s exactly what Kimmich will have a problem with, at least in this season’s decisive games. Since Rafinha is no longer up to the highest international standards, Kovac Kimmich will need to be a legal defender again.

However, if Benjamin Pavard, the right-back of the French national team, should come next summer, nothing will stand in the way of Kimmich’s future in the power centre of the FC Bayern pitch. And since Kimmich – although he only calls “young players” others – is at least according to his passport still one, it could be a long future.