Bundesliga: The history of the derby district: How sympathy turned into hatred 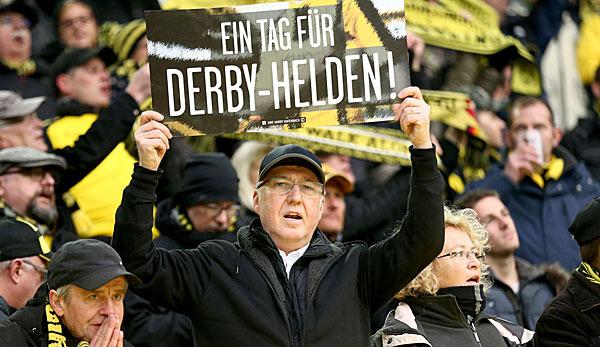 The rivalry between Schalke 04 and Borussia Dortmund (the derby today at 15.30 in the LIVETICKER) is the fiercest in German football. But today’s hostile clubs have long been quite best friends.

The Golden Book of the City of Dortmund brings together the heroes of their time. In 1899, Emperor Wilhelm II was the first to register himself with a fine feather in the crystal-studded piece of jewellery after the opening of the harbour.

35 years later the probably most unusual entry is written in ink on laid paper: They’re the signatures of the Schalker masters of 1934. Actually.

Before the 175th edition of the biggest derby in German football on Saturday, the scenes of that time would be unthinkable. The Schalker in the train, after a triumph already 35 kilometers before Dortmund stopped, almost pulled out of the car, is said to be celebrated in the country of the black-yellow.

“There was a deep sympathy,” says Gerd Kolbe, who knows the Derby story very well as a long-standing BVB archivist.

There was no trace of hate, brawls or the like until the 1970s. First of all, because BVB was simply not a competitor: At the first Schalker successes it kicked in the district class.

“The Schalkers were a kind of BVB construction helper,” reports journalist Gregor Schnittker, who wrote a book about the rivalry in the district. “When Schalke became master, the whole coal pot cheered.”

Ernst Kuzorra worked at the “Consolidation” colliery, led FC Schalke to greatness – and in 1935 he temporarily trained Borussia for his brother-in-law Fritz Thelen.

Stan Libuda scored his most important goal for BVB, scoring it to beat Liverpool FC to the European Cup in 1966. Then he moved back to Schalke – where he was elected into the eleven of the century. That wasn’t a major problem.

And these days? “I would never go to Schalke. That’s my number one bogeyman. I hate it like the plague,” later world champion Kevin Großkreutz said before his move from Rot-Weiss Ahlen to BVB.

Those who change sides are regarded as “traitors” such as Andreas Möller or Jens Lehmann. Big police bids protect the Derby, where it nevertheless crashed powerful at times.

The usual folklore, graffiti, posters, planes with banners: “This is the spice of this game and highly amusing as long as there are no bloody noses,” says Schnittker.

In 2007, officials from both clubs met “for a G-2 summit,” as the FAZ commented. Total de-escalation. The reason: three months before Schalke had gambled away the almost certainly believed championship title – by a 0:2 in Dortmund.

But where does this celebrated rivalry come from? “The sporting failure of the BVB plays a role here. Still acclaimed in 1966, six years later you descend without a hitch or a sound,” says Schnittker. “At the same time, the Schalkers are putting together a team that is perhaps the best of all time.”

However, this is sinking into the Bundesliga scandal. From now on FC Schalke is FC Meineid. Violence breaks out at the derby: “That was the time of duels in the ranks with knuckleduster rings and bicycle chains.”

So it’s hard to believe that the Schalkers in Dortmund are in the Golden Book – and that the Dortmunders had different jersey colours until 1911: Blue and white.