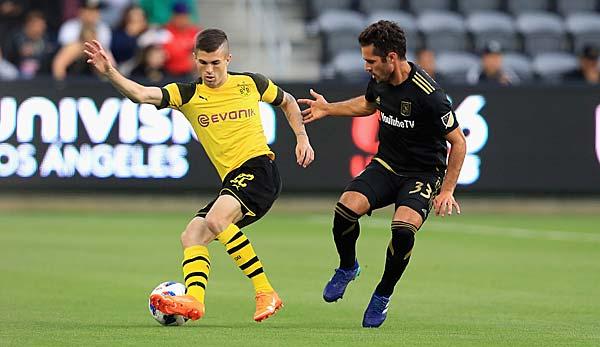 Borussia Dortmund have planned a tight preparation program until the first Bundesliga match day on August 24. SPOX gives you all the information about the summer timetable of the BVB.

With Lucien Favre, the Black-Yellows have a new coach on the sideline. The Swiss will probably make some changes to the squad before the start of the season.

At the end of May, BVB made a guest appearance at the opening of the Banc of California stadium at the Los Angeles Football Club and played 1:1. 18-26 July Borussia Dortmund will return to the USA for its test match and PR programme on the East Coast.

The International Champions Cup will feature three matches against top international teams ManCity, Liverpool and Benfica Lisbon in Chicago, Charlotte and Pittsburgh. In 2019, as in the previous year, a PR tour to Asia is planned.

From the beginning of August, the BVB team will go to Switzerland. The training camp will take place in Bad Ragaz, the club has not yet announced an exact date. In recent years, the club has been preparing for the season at this location.

So far, four test matches have been determined for the BVB before the start of the season: On July 13, the team will face FK Austria Vienna in the Austrian capital. The other three games will take place as part of the USA tour. At the International Champions Cup, the Dortmund team will meet Manchester City, FC Liverpool and Benfica Lisbon.

From August 17th, the team of Lucien Favre will take it seriously. From 17-20.08 the 1st main round of the DFB Cup will take place, the opponent will be drawn on 08 June. A week later the Bundesliga will start the new season. Who BVB will meet on the first day of play will be announced on 29 June