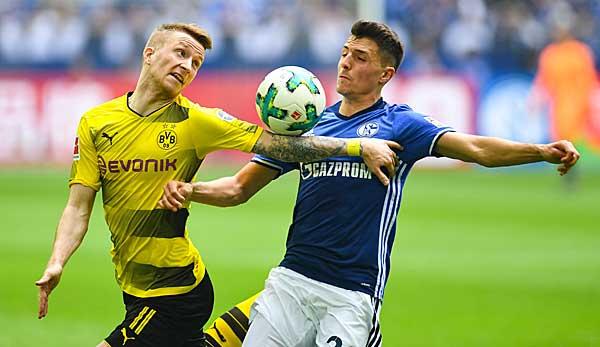 Alessandro Schöpf spoke before the derby about the current situation of both teams and warned the BVB not to take his royal blue lightly. In addition, Clemens Tönnies plans to run for the position of Chairman of the Supervisory Board again and intends to work with Tedesco and Heidel in the long term.

Alessandro Schöpf ran ten times this season for Schalke 04 in the Bundesliga. Against Borussia Dortmund (from 15.30 in the LIVETICKER) the eleventh mission will follow.

In an interview with the Sportbuzzer, the midfielder spoke about the derby: “Dortmund is the unbeaten leader of the table, so the role of favourite is clearly distributed at the moment. So it’s all the more time for the Dortmunders to finally lose.”

The Austrian therefore sees the squires, despite everything, in a good starting position. “In a derby, what happened before doesn’t count. Now we want to show that we can keep up with such a class, currently perhaps even world-class team. If we call up one hundred percent of our capacity, we can also beat the BVB, especially in front of our own backdrop,” explained Schöpf.

He evaluates the squad of the black-yellow permanent rival as follows: “This is a top team that is very strong individually, especially in the offensive, and in direct comparison with us has achieved significantly more than double the number of goals. Above all, Marco Reus stands out once again with his presence. And Jadon Sancho is sensational in one-on-one.”

Clemens Tönnies wants to run for FC Schalke 04 again in the new year as chairman of the supervisory board and stick to his long-term position as sports manager with board member Christian Heidel and trainer Domenico Tedesco. The entrepreneur explained this in an interview with the Bild-Zeitung.

Notwithstanding the continuing problems of the runner-up in the current season, Tönnies explicitly expressed his confidence in the sporting leadership duo. For Tedesco, who has a royal blue treaty until 2022, “there is no doubt that he will lead us out of the valley – to where we belong,” said Tönnies.

Heidel, 62, had already announced that he would be working together beyond the current contract, which runs until 2020: “I have no reason at all to doubt that we will be extending this agreement.

Even after almost 25 years on the supervisory board, Tönnies still does not consider his own mission on Schalke to have been fulfilled. “I’m not wiggling the decision. I would like to run for the Supervisory Board again in 2019. I would like to leave Schalke at the height of the sporting and economic success,” said Schalkes Boss: “A lot has been done, but there is still a lot to be done.

Tönnies doesn’t attribute the squires’ difficulties after second place last season to overestimating their own abilities: “When you become runners-up, there’s every reason to celebrate team and coach. But we haven’t done this for too long.”

Rather, the meat manufacturer questioned the summer transfers despite his oath of allegiance for Heidel: “Of course it is annoying that individual players have not yet ignited or have ignited late.