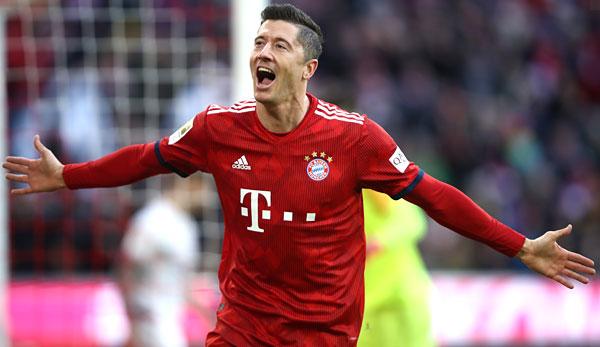 The upswing at FC Bayern Munich can probably be seen most clearly on the face of his goalscorer. After the 3:0 against 1. FC Nürnberg Robert Lewandowski was almost euphoric by his standards and took his time to explain the reasons for the trend reversal. He particularly likes a change from Niko Kovac.

In the past few weeks, Robert Lewandowski has not often tried to take a few minutes for the reporter crowd following a game of FC Bayern in the domestic Allianz Arena. In fact, Lewy’s silent mixed zone appearances have been deja vu experiences every two weeks since at least the end of September.

Like a ghost, the usually noticeably bad-tempered Polish goalscorer hovered over the nubby rubber floor, which is laid extensively in the grey belly of the Allianz Arena. In times of crisis he always left the justification, rags and self-criticism to his colleagues, the usual suspects: Manuel Neuer, Thomas Müller, Joshua Kimmich, Arjen Robben, most recently Leon Goretzka.

Late Saturday afternoon, Lewandowski broke his catacomb silence, strolling fidelly in front of the journalists. No wonder, after all, the 30-year-old had met again for the first time since 24 August, i.e. since match day one of the current season, at a Bundesliga match in his own living room.

He scored two goals in the sovereign 3:0 against 1 FC Nürnberg and brought the Bavarians to the winner’s road with a header and a typical medium striker. Already his 42nd double pack in Germany’s Beletage, only the legendary Bayern bomber Gerd Müller netted even more often twice in one game (55 times).

Surely one of the reasons why Lewandowski seemed so relaxed, with himself and the team at peace as seldom in this season. “This is important for the whole team, because everyone has their share in it. Makes you more confident. I also think this trend is very important to us right now.”

The trend mentioned by the centre forward means that the Munich team had all won the last three compulsory games. A 5-1 defeat of Benfica last Tuesday, in which Lewandowski also scored two goals, was followed by a laborious but deserved 2-1 defeat at SV Werder Bremen and the sovereign opening gallop in the prestigious duel between Upper Bavaria and Middle Franconia.

“I think we’ve got our rhythm back,” said the three-time top scorer of the Bundesliga, adding, “We’ve also become more stable defensively. This works better. These automatisms are coming back.” Positive aspects which, from the point of view of the long-standing permanent dominator, seem to be particularly successful again after four leading players from the executive floor around Uli Hoeneß, Karl-Heinz Rummenigge and Hasan Salihamidzic had been quoted for the report.

Lewandowski also belonged to the exquisite quartet, which was completed by Thomas Müller, Franck Ribery and captain Manuel Neuer. In an interview with SportBild, the 102-time national player reported: “The exchange helped us all, gave us strength. In a situation like the one we had, you have to discuss, analyze.” He added: “All sides have explained what can be done better. Then you feel a relief, it’s easier to keep working.” The whole club benefits from the talks between players and bosses. “Now we’re all going in one direction together,” the former Dortmunder continues.

It is also thanks to Niko Kovac that from now on they have once again embarked on a common path instead of branching off to secondary war scenes, where moles are up to their noses or the instagram stories of player wives are stylized into state acts, who during the crisis analysis obviously did not give the overambitious trainer, who was resistant to advice, but willingly turned various adjusting screws, e.g. curbing the large rotation, ordering Joshua Kimmich and Leon Goretzka to the six-positions and granting Thomas Müller more freedom behind Lewandowski.

“The coach tried to change things when it didn’t work out. It’s all about little things, about details,” Lewandowski revealed in the SportBild. “If he shows this insight, it’s not a sign of weakness. It’s the only way he can become a better coach.” Explicitly asked about Müller’s changed role and the associated unmissable upswing in the attacking game, Munich’s Goalgetter was impressed in the Mixed Zone: “I think that’s better for both sides. Thomas benefits from being able to play with me and vice versa. It makes us several players in the penalty area. I’ll have more room and it’ll be easier because I don’t have to fight two or three opponents alone.”

Of course, this is exactly how it should continue in the king’s class. Next Wednesday, the Bavarians will meet Ajax in Amsterdam (20.45 in the LIVETICKER), where they will be competing for group victory and a supposedly more comfortable situation for the round of sixteen. The really big chunks could be circumnavigated for the time being. “Theoretically, you then play against the supposedly simpler opponents,” said Lewandowski. In general it is important to finish the preliminary round on the tabular place in the sun.

Speaking of importance: The Warsaw-born player is currently well on his way to becoming the decisive X-factor in the Bayern game again. Overall, Lewandowski has scored an impressive 19 goals in 20 competitive games in the current round, despite Allianz Arena’s temporary loading inhibition in the league. During the difficult weeks, however, he also missed his cold-bloodedness from time to time. Especially in the mission to knock Borussia Dortmund, the leader and team of the hour, from the temporary throne, the Munich team relies on a reliably hitting Lewandowski.

Robert Lewandowski’s statistics of the season

“We must first think of ourselves. The distance to Dortmund is already large. We have already lost enough points, we have to do our job first and then we can look at the other teams,” he clarified with regard to the table situation. Lewandowski also recently revealed in the SportBild interview that he even welcomes the unusual role as a hunter.

The reason: “In recent years we have always looked back. When you see someone is in front of you – that means you are more under tension. You’ll be all the more able to catch up with this team. It’s easier as a hunter to attack from behind than when you’re the first to look at the attacks from behind.”

Now that Lewandowski is taking pictures in the Bundesliga again, the mood – also thanks to the crisis discussion – is altogether right again, one or two attacks on the so far very consolidated BVB can be eagerly awaited. Will a grumpy or noticeably relieved Lewy hit the Mixed Zone in May? I don’t know.