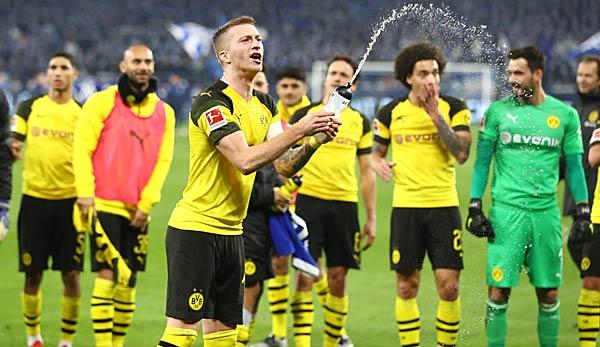 Marco Reus says after winning the derby that S04 played “funny football”. Niko Kovac is enthusiastic about his new midfield axis and Andreas Luthe explains the drama around his tongue. The voices for the 14th Bundesliga matchday of Sky and from the Mixed Zone.

… about the game: “We didn’t allow anything for more than 90 minutes, we ourselves had a lot of possibilities, twice aluminium and a goal that was taken away from us. I’m happy with the performance, the important thing was that we finally played to zero and didn’t give up a lead or got restless by scoring against each other. We played it down in a concentrated way, knowing that in four days we’ll have another difficult game in Amsterdam. I’m very happy, nobody’s hurt.”

… about his midfield axis Kimmich and Goretzka: “Both have a very good understanding of football, see certain situations. They also get along outside the square, which is also very important. And they’re on the national team together. That’s one axis that’s really fun at the moment. But not only the two, but the entire team now in the last three games. That’s where we’re going. That’s where we need to go. When you have Christmas parties, it’s no fun when the results aren’t right.”

… to his midfield partner Leon Goretzka: “We complement each other quite well in the position. We have already played together in the youth, in the U21. We’ve known each other for a long time and it’s always fun to play with him.”

Michael Köllner (coach 1.FC Nuremberg): “I congratulate to the home victory, I congratulate to a strong performance – that had to do of course also a piece far with us. We didn’t put our game on the court the way we imagined it to be, with courage, with determination, with a certain duel power. The 0:1 was hard to cope with, and then you naturally have a hard time when one avalanche after the other rolls on you. We’re glad to see that the 0:3 went reasonably well, but we don’t necessarily have to play like that.”

Georg Margreiter (1. FC Nuremberg): “We wanted to sell ourselves as expensive as possible. This year we already had problems with big opponents abroad or got a clap. That didn’t happen to us today, but it never tastes good when you lose 3-0. We just played too timidly in the first half. It may also be due to a lack of maturity.”

Domenico Tedesco (coach FC Schalke 04): “It was a game in which we actually fought our way in from the start. But then we are still 0:1 behind, a bit out of nowhere. After the 1:1, we already had the feeling that game could tip over. With Burgstaller we have lost the only still nominal striker. In the second run it was difficult, we didn’t have enough power. We didn’t have any more strikers to tie up the front balls. We had no discharge and then of course it will be difficult. This year we already got a few blows from the neck and got up again and again. That’ll happen this time, too.”

Daniel Caligiuri (goal scorer FC Schalke 04): “We didn’t come into the game so badly, but we get the goal after ten minutes and then you run behind. We have often proven that the mentality in the team is very, very good. I think after the 1:1 we are at the trigger, but then a few ball losses happen to us, which should not actually happen to us. They have proven that Dortmund can counter very well.”

Lucien Favre (coach Borussia Dortmund): “It was a very difficult game for us, especially in the first half. Schalke was very well organized, we had too little possession and no clear goal chances. What I liked was how the team reacted after the 1:1. She played better, kept her cool, had more ball possession and more chances to score. We deserved to win in the end.”

Marco Reus (captain Borussia Dortmund): “The victory is deserved because we dominated the game for 90 minutes. In the second half we let ourselves fall asleep, Schalke played funny football. But in the end we showed a good mentality. It’s really fun with this team.”

Thomas Delaney (goal scorer Borussia Dortmund): “I’m tired, but it’s cool. It was a tough game, not so nice, I think. It was a derby with a lot of intensity and a lot of duels.”

Bruno Labbadia (coach VfL Wolfsburg): “My team did very well after the neck blow of the early backlog. That was impressive. The goals were then very well played out and earned. We didn’t win the game because we didn’t have the last punch after the half. You have to compliment both teams on the way they played football.”

Julian Nagelsmann (coach 1899 Hoffenheim): “I was very satisfied with the first 20 minutes, so we deliberately decided against possession of the ball. After the equalization, Wolfsburg became more and more decisive. After the break we then brought a fifth striker and deservedly balanced. Over the whole 90 minutes we were a bit more dangerous in phases, but in the end the result was largely okay.”

Benjamin Hübner (TSG Hoffenheim): “I can’t explain it to myself right now, because an early goal away should give us confidence. In the second half we changed over and played totally offensively. That was then rewarded with a point.”

Heiko Herrlich (Coach Bayer Leverkusen): “We had to be very patient. But we had our chances, even if there weren’t many. Luckily Lucas scored his first goal of the season, after that it was another game. In the end there was a bit of trembling, but in the end the victory is absolutely okay.”

Kai Havertz (Bayer Leverkusen): “Before the season we set ourselves completely different goals that we haven’t been able to achieve yet. Now we just have to think from game to game and try to play our way out of the low again. If we can do that, everything is still open at the top.”

Manuel Baum (coach FC Augsburg): “You could see that we wanted to take a defensive approach today. In the first half we had one or two problems and our counterparts didn’t work out well. In the end, we made one mistake behind too much and didn’t score the goal ourselves.”

… about his collision with Kevin Volland: “I have to say that I have already received a heavy blow. Neck’s a little stiff, part of tongue’s gone. I bit it and it’s missing a bit, but that’s not a problem. That’s not for the TV picture.”

Christian Streich (coach SC Freiburg): “We had a favourable game development and we were very present in the duels. That’s why we won the game. I’m very happy because I can also read the table.”

Nils Petersen (goal scorer SC Freiburg): “Once you’ve won against all the Bundesliga clubs, you can be proud of it. If I can score another goal, I could overtake Cisse. He’s an icon in Freiburg. They’re all things that make you proud, but they’re secondary things. Today we have succeeded in many things. We had perfect luck. Leipzig didn’t stand a chance today.”

Ralf Rangnick (coach RB Leipzig): “We deserved to lose. Freiburg deserved to win. With the exception of the first ten minutes, we didn’t play well. Especially the game against the ball was weak.”

Marcel Sabitzer: “We are very disappointed. You have to look at it soberly: We did a bad job today and didn’t do what we wanted. We need to analyze the game and make it better next Sunday. That was nothing today!”

Florian Kohfeldt (coach Werder Bremen): “The victory was very important for us, therefore I am overjoyed. Our game today was especially good in the first half. In the second half it was a bit wild. But we worked well as a team today.

Friedhelm Funkel (coach Fortuna Düsseldorf): “We get goals that we simply can’t get. The second and third goals are goals out of nowhere. This can’t happen. As long as we make such individual mistakes, it will be incredibly difficult. I trust this team, though. We’ll get one or two points before the winter break.”