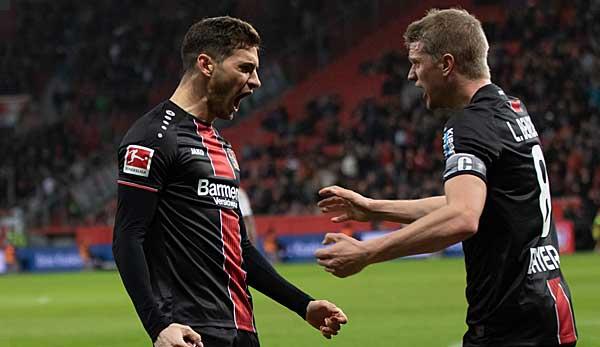 With his first goal of the season, Joker Lucas Alario has heralded the hoped-for recovery of Bayer Leverkusen. Just under two minutes after his substitution in the 75th minute, the Argentinian made his deserved 1:0 (0:0) victory over his favourite opponent FC Augsburg perfect, who also failed to win against Bayer in the 17th attempt and, after his fourth defeat in a row, slipped further towards the relegation zone.

Alario not only ensured the Leverkusen team’s third home league victory this season, but also that Bayer were able to celebrate two consecutive three places in front of their home crowd for the first time since September 2017.

In front of 25,558 spectators, Charles Aranguiz gave Leverkusen the first good chance in the tenth minute, but FCA goalkeeper Andreas Luthe was on the spot when the Chileans shot from a distance. Only three minutes later, however, the keeper would have been powerless with a header from young star Kai Havertz, but after his header the ball just missed the goal.

Augsburg’s regained goalscorer Alfred Finnbogason first hinted at his class in the 22nd minute when he transferred Aleksandar Dragovic and then failed with a spin shot on the outer net. Shortly thereafter, good Aranguiz just missed the FCA goal with a free-kick. Afterwards the game flattened out and developed into a mispass festival.

Even after the break it didn’t get much better. Leverkusen had still more of the game, was the clearly better team, but before the opponent’s goal but too harmless on balance.

For short excitement provided in the 49th minute a herd formation, in whose process Leon Bailey was warned. Shortly afterwards, Kevin Volland missed a good opportunity in his 200th Bundesliga match. Also Karim Bellarabi tried it again and again, but got stuck again and again in the multi-legged defense of the Augsburger.

The FCA stood defensively in spite of some small Wackler quite safe, in the game to the front however hardly anything ran together with the guests. Augsburg only crossed the middle line sporadically after one hour after the substitution of Finnbogason. In the 73rd minute in Julian Brandt and Alario, two fresh offensive forces were brought in, which paid off in the end. Alario met after good preliminary work by Bayer captain Lars Bender. Augsburg’s Dong Won Ji (81st) had bad luck with a batten hit.