Bundesliga: Heldt freaks out after Witz-Elfer: “No longer acceptable the whole shit!” 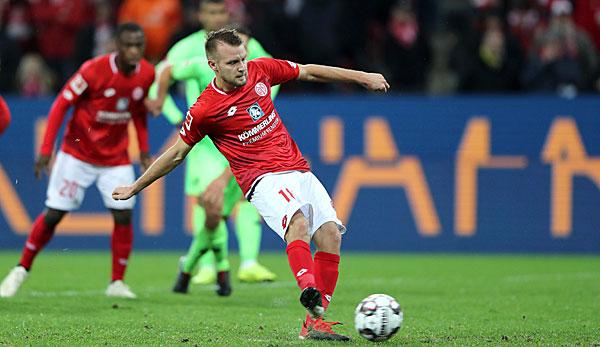 Hannover 96 won a lucky 1:1 (1:0) victory at FSV Mainz 05 on the 14th matchday of the Bundesliga – but remains second last. After four previous bankruptcies in five games, coach Andre Breitenreiter can at least boast a partial success. The game was overshadowed by renewed penalty discussions and a pyro interruption. Hanover manager Horst Heldt freaked out.

Hendrik Weydandt (12.) brought the guests into the lead early and gave the Mainz team the 600th goal in their Bundesliga history. In the final phase, Daniel Brosinski (89.) compensated by a controversial penalty kick. In the heated final phase Oliver Sorg flew away with yellow-red.

Also on the 49th birthday of manager Horst Heldt, 96 missed the first away win of the current season. How long the job guarantee of club boss Martin Kind for Breitenreiter (“The game in Mainz is not a final for him”) will last is questionable.

The people of Mainz, who had to do without Rene Adler, Florian Müller, Phillipp Mwene, Ridle Baku and Emil Berggreen, immediately had the great opportunity to compensate – Pierre Kunde awarded (14th).

Also in the 23rd minute the guests, who were missing Noah Joel Sarenren Bazee, Ihlas Bebou, Felipe, Timo Hübers, Edgar Prib and Linton Maina, could rely on their luck. After a shot by Daniel Brosinski, the ball jumped from the head to the hand of 96 defender Kevin Wimmer – the first excitement.

After studying video, Hartmann decided against a penalty shot. Even the mere hint from Cologne brought 96 manager Horst Heldt to the palm of his hand: “What is he interfering with? Shut him up!” After that not much happened until the break. The Mainzern lacked the creativity in the offensive to crack the defensive bar of the guests.

Shortly after the side change the game had to be interrupted for six minutes due to pyro activities from the guest fan block. When football was played again, Danny Latza from Mainz hit the post (61st).

In the final offensive of the hosts Matthias Ostrzolek brought Mateta down in the penalty area with a hip thrust. The contact was minimal, the whistle correspondingly questionable. Brosinski turned after long protests of the guests from the point.

Bundesliga: Mainz – Hanover in the LIVETICKER: Liberation stroke for broad riders and Co.?
Bundesliga: Gladbach’s Joker, a sending-off and an own goal finish the VfB