Bundesliga: Gladbach’s Joker, a sending-off and an own goal finish the VfB 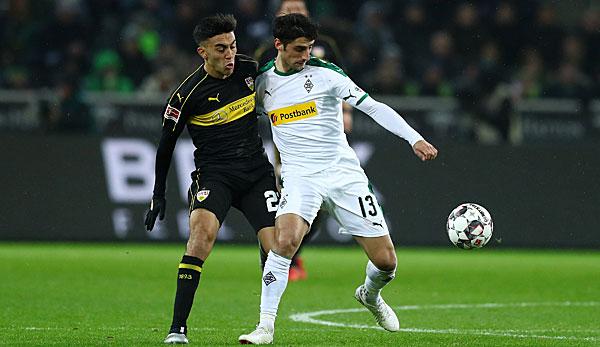 Borussia Mönchengladbach has expanded its home series in the Bundesliga thanks to the Joker Raffael and Florian Neuhaus. The Gladbach-based team celebrated a hard-won 3-0 (0-0) victory over VfB Stuttgart and remain in the lead, Borussia Dortmund, second in the seven-point gap. For the team of coach Dieter Hecking it was the tenth home win in a row across the seasons.

Raffael (69) met on presentation of the simultaneously substituted Neuhaus’, the 21 year old midfielder (77) refined a preliminary work of the strong Belgian Thorgan Hazard to 2:0. World champion Benjamin Pavard (84) met for the decimated Stuttgart into his own net – the substituted Erik Thommy (83) had seen the yellow-red card.

This season it was Gladbach’s seventh home win in a row and it was deserved. The Stuttgart offensive around the luckless ex-national player Mario Gomez was too harmless.

After the 2-0 defeat at RB Leipzig, the first Gladbach game of the season without scoring a goal, coach Hecking reacted and for the first time this season called up Ibrahima Traore from the start. The wing forward was the first to score against his ex-club Gladbacher (7th), but too harmless for the VfB keeper Ron-Robert Zieler.

It was one of the rare penalty area scenes in the initial phase. Stuttgart’s chain of three, with which coach Markus Weinzierl wanted to compensate for the suspension of his midfield clearer Santiago Ascacibar, was organised by Pavard and was lucky: After 27 minutes Alassane Plea “stole” a goal from his team-mate Michael Lang.

The so far successful Frenchman (8 goals of the season) pushed the ball after a corner from the offside over the line and had to put up with Lang’s accusations, whose shot would have been enough for the lead. While the Gladbachers and the majority of the 48,590 spectators were still struggling with the big chance, VfB woke up.

Bundesliga: Heldt freaks out after Witz-Elfer: “No longer acceptable the whole shit!”
Bundesliga: Pavard: first own goal, then injured