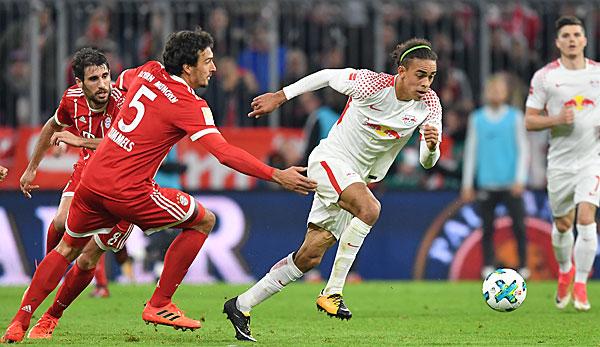 Yussuf Poulsen prefers Mats Hummels as his opponent in duels with FC Bayern. Steffen Freund criticizes the German record champion for not having held Matthias Sammer.

All news and rumours about FC Bayern can be found here.

“I prefer to play against Mats Hummels, because I can run into his back and I have speed advantages”, said the attacker from Leipzig in the CHECK24 double pass at Sport1.

Hummels currently has to be satisfied with his role as a substitute for the Munich team. Currently Jerome Boateng and Niklas Süle are preferred to the ex-Dortmunder.

It seems that Süle has worked his way up the ladder. According to Poulsen comprehensibly: “I don’t like to play against Niklas Süle in a duel. He’s a very good central defender.” It would be more difficult to win the running duel against the former Hoffenheimer.

Steffen Freund has criticized FC Bayern for the separation from Matthias Sammer. “For me, Bayern Munich missed a great opportunity to install him step by step as sports director, regardless of his illness,” explained Freund in Wontorra – the football talk at Sky.

At Sammers request, FC Bayern terminated their contract with the former sports director in the summer of 2016. Sammer gave the high expenditure of time and large energy loss as reasons. Bavaria’s CEO Karl-Heinz Rummenigge later explained to SportBild: “He simply wanted to do something new, and perhaps he also found fun in life, which he hadn’t necessarily communicated before.

Since April 2018, Sammer has acted as external advisor to the BVB management. Freund played with Sammer at BVB between 1993 and 1996.

Bundesliga: Sancho reveals: This is my favourite player
Bundesliga: Mainz – Hanover in the LIVETICKER: Liberation stroke for broad riders and Co.?