Bundesliga: FC Bayern after the victory against Nuremberg: Hurrah, we have a system! 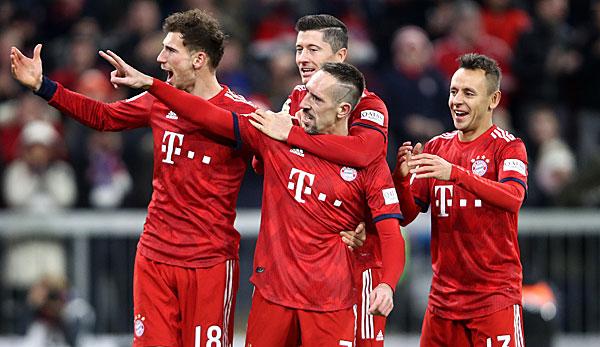 The 3:0 against the 1. FC Nuremberg was the third victory in a row for FC Bayern Munich. The team was defensively stable and combined offensively well. Actually: a functioning system was recognizable.

For Manuel Neuer, the appointment of this Bavarian derby between FC Bayern and 1 FC Nürnberg was an extremely bitter affair. The kick-off took place at the same time as that in Gelsenkirchen, where the North Rhine-Westphalian Ruhr derby was played between FC Schalke 04 and Borussia Dortmund.

“It’s basically annoying that I couldn’t see the game,” said Neuer: “As a professional and football enthusiast, you want to see such a game for yourself.”

After all, the results service of the Fröttmaninger stadium screens offered him a small compensation. “Because I had nothing to do at the back and the results were displayed at the top, I stayed up to date,” explained Neuer. Especially spellbound, he looked up in the 74th minute. Shortly before the screen had announced a 1:1 intermediate score from Gelsenkirchen and now it was in the highest dramaturgy (and the simultaneous score of 3:0 for FC Bayern) again: “goal on Schalke.

Did Dortmund collect the arrears? Is this the beginning of the Munich race to catch up? But then, “1:2, Sancho.” And it stayed that way. Again they had won, these almost unstoppable Dortmunder. FC Bayern are still nine points behind.

From Munich’s point of view, however, this afternoon was still a pleasant one, as FC Bayern had won the third compulsory game in a row and also finished two creepy series. For the first time since the 4th matchday FC Bayern remained without a goal in the Bundesliga (then 2:0 on Schalke), even for the first time since the 3rd matchday they won at home again (then 3:1 against Leverkusen).

And perhaps most important of all: it was a victory that was beautiful to look at! And that was also due to Niko Kovac’s actions.

Already before the game he had declared the long beloved rotation abolished. And then he actually had the same starting eleven, which had won 2:1 at Werder Bremen. According to sports director Hasan Salihamidzic, this was a measure that Kovac did not even have to persuade. “He decided for himself, that’s for sure,” he explained.

With the end of the press, Kovac also introduced a new system. Since the 5:1 in the Champions League against Benfica, FC Bayern has been playing a 4-2-3-1, which can sometimes become a 4-4-1-1. For the eleven players who currently have the confidence, this is an ideal system. They seem to be getting better and better – both defensively and offensively.

There’s the double six, Joshua Kimmich and Leon Goretzka. “Both have a very good understanding of football, see certain situations,” Kovac praised after the game: “That’s an axis that’s really fun at the moment.” A two-man axis that gives the team’s game both defensive protection and offensive impulses. The duo’s susceptibility to counterattacking on the double six is much lower, the first two goals it introduced. Kimmich the 1-0 with a corner headed by Robert Lewandowski. Goretzka the 2-0 with a cracker Lewandowski inserted.

In front of the two-man-axis Thomas Müller played. Sometimes as tenner, sometimes as second top, sometimes as Thomas Müller. “My job is to move between the lines,” he said. This has always been his task and will always be, but at the moment it seems as if he is moving between the right lines. Not between any lines in the aft areas like at the beginning of the season, but further ahead. Like in the run-up to the 3-0, when Müller was played between the right lines and the ball then fit exactly right on Serge Gnabry.

It was a gate that came into being through the middle and is therefore exemplary for Kovac’s conversions. Since the match against Benfica, FC Bayern’s playing facilities have changed a lot compared to the previous weeks. Get away from the wing-heavy 4-3-3! “Before that there was always only: to the outside and then off the post”, said Müller: “Recently we have a quite decent combination game again through the centre.”

Müller was quite taken with this word, within a few seconds he said it three times: “Combination game! And it was partly really respectable what FC Bayern combined and played. “We had fun together,” said Müller, and it sounded a bit like: we finally had fun together again.

And Lewandowski had fun with Müller right at the front. He is no longer a lone fighter on the sole search for spaces, some open themselves by the advancing miller all by themselves. “It’s going for both of us,” Lewandowski said, “It’s better for Thomas if he can play with me, and I have more space and don’t always have to play against two opponents.” The result was not only three goals, but also more chances (including three aluminium goals).

After all these impressions, Salihamidzic stood in the mixed zone of the Allianz Arena wearing a blue jacket and said statesman-like: “The word crisis was used a lot, but that doesn’t mean anything any more”.

It is not the two clear home victories against desolate opponents (Benfica and Nuremberg) and a narrow away win (in Bremen) that give FC Bayern hope. But it is the fact that FC Bayern currently has a recognizable system. And a working one at that.