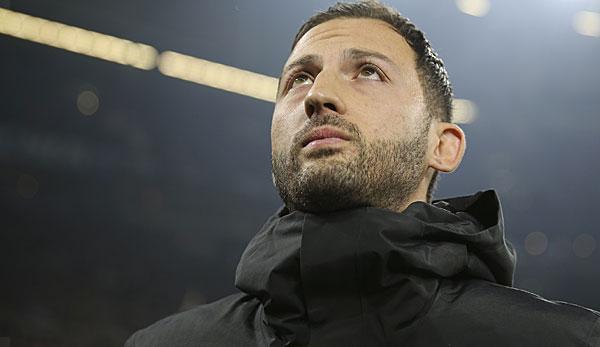 The negative trend of FC Schalke 04 continues with the 1:2 home defeat against archrival Borussia Dortmund. The derby is a clear demonstration of the problems faced by Domenico Tedesco’s team. But they don’t want to use the word relegation fight in the mouth of Königsblau.

While the players in black and yellow jumped and sang to the jubilant guest block, the middle circle was dominated by boundless emptiness. Where the FC Schalke 04 team gathered with their coach Domenico Tedesco, nobody could get a breath of joy out of it. After all, a derby defeat in the Ruhrpott usually feels like a lost championship. But this one pressed a bit more on the Schalker mind than it did anyway.

Tedesco and his men were determined to strike a liberating blow against the undefeated leader in front of their own crowd, a turning point in a season that had been anything but satisfactory so far. Instead, the spectators in the Veltins Arena were presented with the usual image: a mixture of battle and cramp.

The “funny” Schalker play, as BVB captain Marco Reus called it after the final whistle on the Sky microphone, even infected the guests at times. Opportunities were in short supply, the duel of the hated arch rivals lived on tension and physical hardness.

That the Dortmunders kept the better end for themselves was partly due to the individual class of their offensive, this time the much praised English “moped” Jadon Sancho. On the other hand, and Tedesco admitted this afterwards, in the inspirationless play of his team.

“We had little power. It lacks the penetrating power”, the 33-year-old summed up. “If you only hit by penalty in the last three games, it’ll be difficult.”

In fact, the Gelsenkirchen team only fired one shot at Roman Bürki’s case this Saturday afternoon, apart from Daniel Caligiuri’s interim equaliser – and he should not have even counted because of a handball by Guido Burgstaller. Although the goals of the BVB, especially the early 1-0 by the completely free-standing Thomas Delaney after a Reus free-kick, would have been quite avoidable, Schalke’s big problem in this season is and remains the attack.

After 14 games there are only 15 goals on the account of Königsblau. A sad, harmless balance, which Tedesco tried to polish up in vain with many system and player changes in the past weeks. He also ran out of strikers against Dortmund. Breel Embolo and Mark Uth were missing injured, Franco di Santo was not in the squad for obvious sporting reasons. And then after only 36 minutes Burgstaller involuntarily joined the Schalker Lazarett.

Tedesco could, however, have substituted Cedric Teuchert or Yevhen Konoplianka for the last remaining nominal centre forward. Instead, he brought a left-back to Hamza Mendyl on the grounds that he wanted to get more speed into the Schalker game. “Hamza is our fastest player to attack the depths. That’s why we chose him,” said Tedesco.

The Moroccan newcomer, however, did not seem to know at all how it happened and anticipated several situations incorrectly. That his storm partner was named Weston McKennie didn’t make things any better. McKennie, as a defensive midfielder, is not known for scoring either. Like most of his colleagues, the US American is very good at painting, while others are responsible for creative moments.

With the exception of Amine Harit, who, as before the penalty kick, could often only be stopped by a foul, none of the players of the home team sprayed something like a joke. Not even Sebastian Rudy. Schalke’s sports director, Christian Heidel, had transferred 16 million euros to FC Bayern just for this purpose not so long ago.

Rudy was invisible in the derby, winning only 18.7 percent of his duels as the most defensive member of Tedesco’s midfield diamond. Nabil Bentaleb gave a similarly disappointing lecture and was replaced after 55 minutes. In view of all these difficulties, it was all the more surprising that the Schalkers had a point in their pockets until the 74th minute.

The rival from Dortmund didn’t convince completely, as he did recently against Bruges or Freiburg, but in the end he managed to kidnap the trio to Herne-West with his “very good mentality”, as Reus emphasized.

“We responded very well to the goal scored, the team stayed in the game, continued to play football and improved,” praised BVB coach Lucien Favre. The reward: With 36 points after 14 games, the Dortmund team are in a better position than they have been since the championship year 2010/11 (37). On their return to Dortmund, Sancho and Co. received a festive pyro reception from the BVB fans.

They can only dream of such scenes in Lüdenscheid-Nord right now. As beautiful as the qualification for the Champions League round of the last sixteen may be, Schalke’s situation in the Bundesliga is getting more and more dicey. The backlog on the BVB is now 22 points. But much more decisive: The unpopular 16th place is only three counters away. Nobody thinks about relegation.

“This year we already got some neck blows and got up again and again. That will happen again this time”, Tedesco assured. There is no doubt about that, at least from an official point of view. Even before the derby, Schalke’s Chairman of the Supervisory Board, Clemens Tönnies, had given the trainer his backing in the picture: “He will lead us out of the valley – and to where we belong.

Bundesliga: FC Bayern after the victory against Nuremberg: Hurrah, we have a system!
Bundesliga: Fans prepare BVB stars for pyro reception