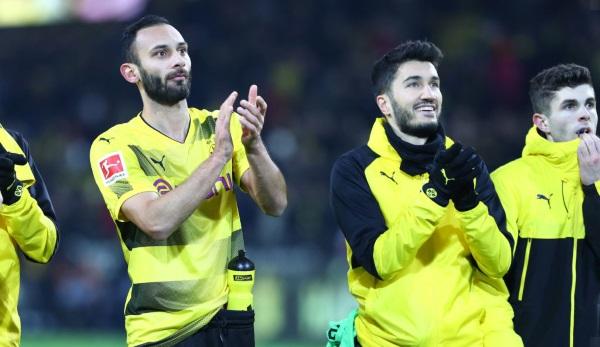 Borussia Dortmund could give Ömer Toprak and Nuri Sahin to Galatasaray. Julian Weigl will miss the training start.

The most important news of the day about Borussia Dortmund at a glance.

According to the Turkish online portal Takvim, Galatasaray is interested in Ömer Toprak and Nuri Sahin. The coach Fatih Terim, who knows both Turks from the national team, is expected to do so. The 64-year-old would like to reunite with the players of the BVB.

While recent media reports suggest that Sahin is actually on the list of potential sales, the Toprak case is not so clear. With the signing of Abdou Diallo from 1st FSV Mainz 05 and the departure of Sokratis to FC Arsenal, four central defenders are currently available again.

It seems unlikely that the BVB would let Toprak go and start the season with three central defenders. A transfer from Sahin also seems complex, as the midfielder plans to offer himself to coach Lucien Favre and fulfill his contract by 2019.

According to sports director Michael Zorc, Julian Weigl will miss the start of training under Lucien Favre: “Julian had some problems with the adductors in the last matches before the end of the season. “The symptoms have not subsided, even on holiday.”

According to Zorc, Weigl will initially complete some individual units. It is currently unclear when he will be able to start training with the team.

According to a report by the Westfälische Rundschau, the BVB has refrained from signing Benjamin Pavard’s contract with VfB Stuttgart. The L’Equipe had previously reported that besides FC Bayern Munich, RB Leipzig and Borussia Dortmund would also be interested. According to the report, Dortmund had considered the option, but ultimately decided against the French international for reasons of price.

Pavard is currently convincing with the French national team at the 2018 World Cup in Russia and scored an outstanding goal against Argentina. He is still under contract in Stuttgart until 2021, but according to SportBild he will have an exit clause of more than 30 million euros from summer 2019.