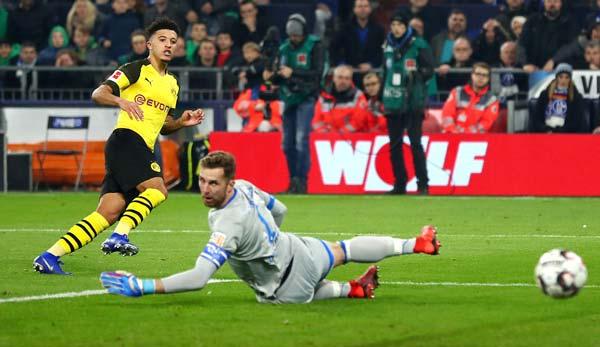 Borussia Dortmund has won the 93rd Bundesliga derby against arch-rival Schalke 04 2:1 (1:0) and further consolidated its leading position. Jadon Sancho made the decision after Daniel Caligiuri had equalized the BVB lead by Thomas Delaney.

Schalke coach Tedesco made two personnel changes compared to the draw in Hoffenheim (1:1): Harit and McKennie started for Serdar (bank) and Wright (not in the squad).

McKennie, actually located in central midfield, was forced to move to the top next to Burgstaller because of the many injured attackers. Together with Rudy, Schöpf and Bentaleb, Harit formed the four-midfield, which was mostly formed as a rhombus.

In contrast to his opponent, BVB trainer Favre was almost able to draw from the full. After his victory against Freiburg (2:0), he also exchanged twice: Akanji started for Zagadou (foot compressed), Alcacer initially replaced Götze on the bench.

The favrean basic orientation, the 4-3-3, changed as little as the self-confidence of the table leader. The Dortmunders, unimpressed by the whistles of the over 60,000 S04 fans, went into the game, presented themselves gallant and determined.

Especially Delaney. After a Reus free-kick from the semi-field in the 7th minute, the midfielder boiled McKennie and Sane off without a problem and pushed the ball over the line with his head.

The landlords needed time to recover from this too simple counterattack. Harit, Bentaleb and Co. managed to get the ball circulating within their own ranks, but the Tedesco side had few chances.

Burgstaller had the biggest opportunity in half one, after a corner in the 28th minute he finished completely free in front of the BVB housing, but failed because of Bürki. Shortly thereafter, the striker was injured and had to leave the field, increasing Tedesco’s personnel worries.

Without the last budget striker, Königsblau did not have much of a chance in run two. Black and yellow neither. The Derby lived – as so often – from tension and physical hardness.

The hosts benefited from this physical hardship after a good hour, when Reus Harit climbed on his foot and Referee Siebert, after consulting with his video assistant, decided on a penalty kick. Caligiuri must have changed. The Schalker joy lasted however not even a quarter of an hour. Sancho overcame Fährmann after a great interplay with the substitute Guerreiro and secured the BVB the next triumvirate.

Dortmund’s Derby hero at just 18. Not only scored the much acclaimed winning goal, but also proved to be a constant source of unrest for the Schalkers with his dribblings. Most conspicuous offensive player. Also strong: the Dortmunder Doppelsechs Delaney-Witsel. Witsel surpassed with a pass rate of 96 percent in the opposing half.

One of some stalkers standing next to him. The weakest player in his team in the total (18.2 percent), plus only 48 ball actions. Even picked up a yellow card in the end.